Our artemisinin is the active constituent derived from the herb, Artemisia annua (sweet wormwood), which has been used for centuries for its health-promoting properties. To provide a 100% vegan formulation, this product is encased in a vegetarian capsule. 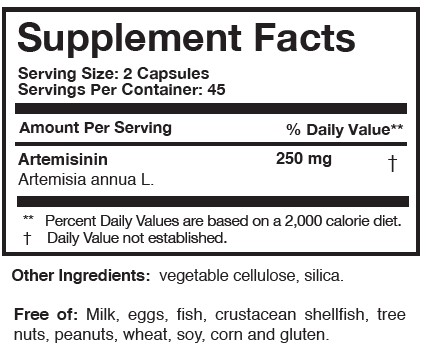 Suggested Use: As a dietary supplement, adults take 1 or 2 capsules one or two times daily, away from food and iron or as directed by your health care professional.

Caution: Not indicated for pregnant or nursing women. Long term administration (greater than one month) should be monitored by health care professional and include liver enzymes and hemoglobin testing. Detoxification reactions may be experienced by some individuals.

Artemisinin is a drug derived from the Asian plant Artemisia annua. This aromatic plant has fern-like leaves and yellow flowers.

For more than 2,000 years, it has been used to treat fevers. It’s also an effective treatment for malaria.

Other potential uses include as a treatment for inflammation or bacterial infections or headaches, though there is no scientific data to support this.

Artemisia annua is known by several other names:

Recently, researchers have studied the effect artemisinin has on cancer cells. However, human clinical trials and research are limited.

Researchers think artemisinin could be an alternative to more aggressive cancer therapies, with little risk of developing a drug resistance.

A 2015 study revealed artemisinin was more effective in killing cancer cells when combined with iron.

In addition, University of Washington researchers found artemisinin to be a thousand times more specific in killing certain cancer cells than current treatments, sparing normal cells from being destroyed while targeting cancer cells.

In their study, researchers bound artemisinin to cancer transferrin, a cancer-killing compound. This combination “fools” cancer cells into treating the transferrin as a harmless protein. Results showed that leukemia cells were destroyed and white blood cells were left unharmed.

Though there have been success stories with this treatment, artemisinin research is still experimental, with limited data and no large clinical trials on humans.