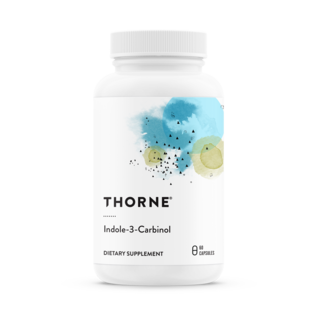 Indole-3-Carbinol contains a compound found in cruciferous vegetables such as cauliflower and cabbage. It helps maintain an optimal ratio of 2-hydroxy (good) to 16-hydroxy (bad) estrogen.*

Cruciferous vegetables, including broccoli, cauliflower, Brussels sprouts, and cabbage, contain a compound called indole-3-carbinol (I3C).* As a nutritional supplement, I3C provides key nutritional support for the liver's detoxification of estrogens, thus playing an important role in supporting female reproductive health.* A large portion of I3C is converted to diindolylmethane (DIM), the substance believed to be the primary contributor to I3C's beneficial properties. DIM has been shown to selectively bind to estrogen receptors and might act as an estrogen antagonist.*

ALLERGY WARNING
This product is contraindicated in an individual with a history of hypersensitivity to any of its ingredients.

PREGNANCY
If pregnant, consult your health professional before using this product.

INTERACTIONS
There are no known adverse interactions or contraindications at publication date.